The PHA Project aimed at developing a sustainable production process of polyhydroxyalkanoates (PHAs) using photosynthetic bacteria in new generation photobioreactors fed with agro-industrial wastewaters, and at producing thermoplastic biodegradable/compostable composites based on PHAs and low-cost natural fibres for applications in marine and terrestrial environments. Specifically new PHA composites are developed for the following applications:

The partnership of PHA project is composed by the coordinator FETMO Engineering expert in mould making and processing of plastic by injection moulding, ZEFIRO masterbatch producer, Cooperativa Sociale Giovanile, service provider as, among many, beach cleaning and plant nursery, the Departments of Biology and of Civil and Industrial Engineering of University of Pisa, the Institute of Ecosystem Studies of National Research Council (CNR-ISE), supported by the subcontractor Laboratori ARCHA.

In terms of PHA production, during the project, a specific purple bacteria was investigated as PHA producer, using two different low-cost agro-industrial wastewaters, coming from dairy and olive oil industry, as culture media. The process was scaled-up form laboratory to pilot scale with a tubular bioreactor, reaching a dry biomass productivity ranging from 86 to 149 mg/L day, with a PHA content of 40-50% on dry biomass.

Biodegradable composites based on PHA and natural fibres, such as fibres of Posidonia Oceanica (PO), Wood Saw Dust (WSD) and bran were produced by extrusion in presence of appropriate amounts of plasticizer and filler. The composite granules were then processed by injection moulding to obtain different objects, from caps and plates for domestic uses (based on PHA/bran), to pots for terrestrial nursery (based on PHA/WSD), to pots and tutors for coastal/marine nursery (based on PHA/PO).

The biodegradability of the optimized composites was confirmed in different environments: 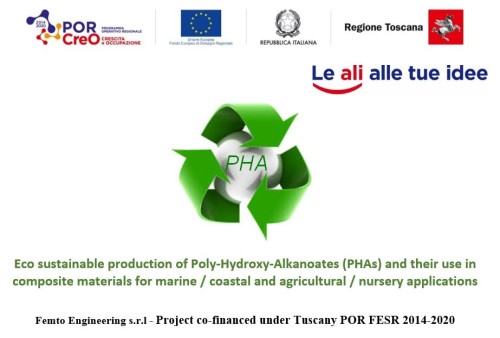 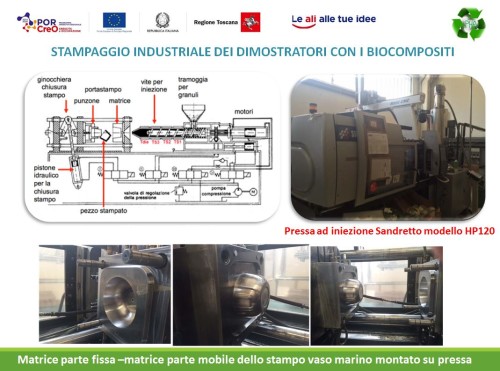 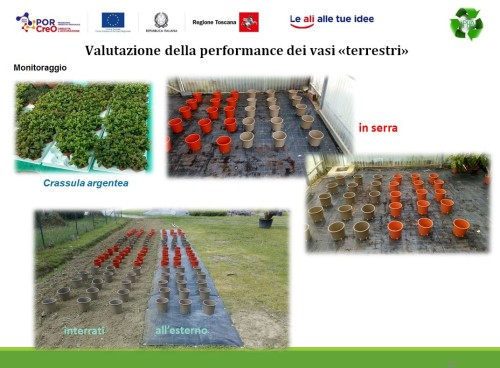